Alexander has the youthful appearance of a young man in his early twenties with black hair that is naturally messy and typically features a fringe on the right side that partially covers his right eye. However, when it is brushed down or becomes wet, the bangs cover his forehead and side-locks framing the sides of his face while the back extends to the middle of his forehead. His facial features are considered to be very handsome and warm with hazel eyes and lightly tan skin described being "great" as he never suffered from zits or blemishes. In spite of this, his body has accumulated a number of scars including a cross-shaped scar on the lower part of his abdomen, a horizontal jagged scar on his left side and several more covering his back. He is rather tall as he stands at 6'2" which tends to make him tower over many. Due to the vigorous training he underwent growing up, Alexander has a solid build with an lean but muscular and well-toned musculature which is evident by the broadness of his shoulders, . Combined with his handsome looks and muscular body, he has earned a strong title for his good looks and is considered to be popular with the girls though he often appears intimidating, sometimes unintentionally, which makes it difficult for those around him to approach or talk to him.

During Alexander time as part of the Second Destroyers, he wore black combat boots, dark pants with a brown belt that tilted down left and a small pouch attacked at the back. He also wore black, fingerless gloves with dark grey cuffs that had zippers on the outsides. Along with this he wore a Destroyers jacket that was dark grey in color with black cuffs that he typically had pushed up to right below his elbows and kept zipped up. Rather then having the circular rings in the collar like the other Destroyers, he had one located on the outside of his arm.

Add a photo to this gallery

Alexander has a laid-back yet reliable and strong personality who is able to remain calm and keep his cool under pressure in the most arduous and dangerous situations, even when provoked or angry. This is shown when he refuses to retaliate back when picked on by the other nobles. This also applies to perverted situations: . He has proven multiple times to have a great amount of patience as he does not allow rage to get the best of him whenever someone badmouths or insults him. Alexander is stalwart in constantly striving toward bettering his combat skills and never once permits himself to be complacent as despite his inclination to isolate himself from others, he readily accepts any challenge that is put forth to him to test his mettle. He is often described by many as a paragon of courage and toughness that refuses to let himself be intimidated by anyone or anything while being able to inspire confidence in those around him even in situations where people will usually give up hope. Alexander has shown various times to have a love for combat and finds entertainment in fighting those who give him a challenge while he is quick to grow bored if the opponent turns out to be weak. He often shows an honorable side as refuses to resort to cheating or using dirty/cheap tricks in order to gain an upper hand in battle due to finding it ¨dishonorable¨.

While it is often downplayed, he has a perverted side to him given his fondness for breasts and butts. Even if its by accident, he simply 'rolls' with it and let's himself enjoy the situation without getting worked up about it. His perversion is also evident by the fact that he has no problem with the idea of having a relationship with multiple women and rather enjoys it though he doesn't let it get to his head. This often earns him a scolding from though other girls don't mind and often go along with it. Inspire of this, he doesn't go out of his way to be a pervert as he will usually try his hardest to show restrain and respect to the woman around him even to those who act lecherously around him. He also knows when to draw the line as he refused to have sex with when she felt pressured to, stating that it was something that should happen only when she was ready. Much to many people's embarrassment, Alexander has very little modesty and an unusual view on the concept in general as he started getting undressed in front of others while displaying confusion at . He has no problem talking to others whenever he is naked without showing any embarrassment, showing he has no problem with others seeing him naked nor does he feel any discomfort discussing about sexual topics. A running gag is for him . Alexander has shown numerous times that above all else, he treasures the relationships with his family and friends as he will go out of his way to ensure that they are happy. This, along with several of his other traits, is said to be one of the reasons why the girls within his group are in love with him. Another sign of his kind nature is that despite acknowledging that are in love with him, he refuses to take advantage of it when their angry or upset.

In spite of him being able to remain calm and cool-headed in many situations, there are moments where he has found himself becoming flustered and embarrassed.

Despite his seemingly kind nature, he has a much more scarier side to him that typically shows itself when his friends or loved ones are threatened by anyone in which his demeanor quickly change's to one that is cold and dangerous.

As a Superhuman Normal, Alexander possesses all the physical abilities of a Twilight without the compensation though he is considered to be physically superior than most Twilights and many Superhuman Normals with humans never posing a challenge for him. Despite having a habit of holding back when fighting others, he is considered to be very powerful with estimating his rank to be that of S/5 after mistaking him for a Twilight. During his fight with several members of the Destroyers, he was able to hold his own while holding back and defeated them with only mediocre effort.

She is the only human 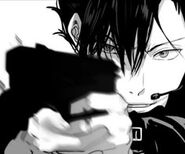 Add a photo to this gallery
Retrieved from "https://gangstafanon.fandom.com/wiki/Alexander_Morrison?oldid=946"
Community content is available under CC-BY-SA unless otherwise noted.