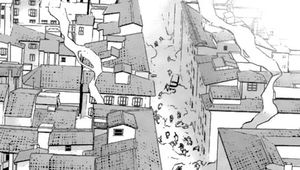 Ergastulum is a city in an unknown country in which the series GANGSTA. takes place.

Ergastulum was founded in the wake of the War of Unification in 1913. It was originally intended as a quarantine for Celebre users from the war, later known as Twilights. Twilights born outside of Ergastulum, or "strays", are targeted by the government to be identified, tagged and relocated to Ergastulum.

In 1926, prison overcrowding caused the government to open Ergastulum to criminals as well, regardless of whether they were Twilight or human. It also became a home for refugees from various countries. Because of this there is a high amount of racial and ethnic diversity in Ergastulum.

The Paulklee Guild's foundation in 1934 raised the social status of Twilights by organizing them into a mercenary guild for hire. Following a period of unrest, Ergastulum enjoyed relative stability during the early 70s due to an understanding between all four ruling organizations. This short-lived peace gave way to further Anti-Twilight resistance in the 80s, beginning with protests at the four city gates and leading to Twilight hunts within the city. The government employed mercenaries alongside national troops to suppress the rebellion. The instability culminated in a notable incident in '89.

Ergastulum is divided into ten districts with the government neutral zone occupying the heart of the city.

While Ergastulum is theoretically part of a larger country, the primary governing forces internally are the local mafia families and the guild. These organizations are:

The heads of these four organizations are considered the "Four Big Fathers" of Ergastulum.

Retrieved from "https://gangstafanon.fandom.com/wiki/Ergastulum?oldid=750"
Community content is available under CC-BY-SA unless otherwise noted.