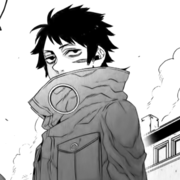 Superhuman normals are descendants of the Celebre users in the war who weren't affected by the drug's after-effects or toxicity. Despite how little in number they were, most were raised to become Hunters. Unlike Twilights, superhuman normals do not wear tags and don't seem to be ranked in any way.

Due to their predecessors use of Celebre, superhuman normals possess enhanced physical capabilities equal to, or sometimes exceeding that of Twilights. Also, because their predecessors were immune to the after-effects and toxicity of Celebre, these superhuman normals do not suffer from the "compensation" that Twilights suffer from. As Worick Arcangelo noted, "Hunters are just like the Tagged without the compensation"

Retrieved from "https://gangstafanon.fandom.com/wiki/Superhuman_Normal?oldid=742"
Community content is available under CC-BY-SA unless otherwise noted.